Transeurosat aims to explain and show the uses of satellite communications and related technologies. For example, Transeurosat's members SNI and Vitrociset organized with the Belgian town of Mont-Saint-Guibert and SpecterCAT the TRIPLE demonstration of an hybrid satellite/wifi "mesh" network with material support from Eutelsat and applications providers including G4Securicor. The demonstration was followed by an open day with exhibition for the general and specialist public. 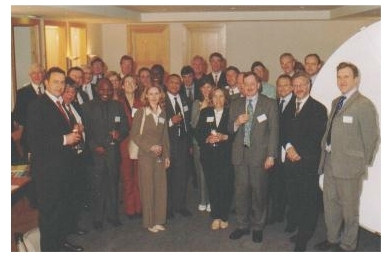 Among other activities, Transeurosat has also held activities to explain how a range of satellite solutions can help establish efficient, secure and cost-effective corporate networsks. The picture facing is of an event for the benefit of diplomatic missions and was organized at the British Embassy in Brussels with the aid of the British Chamber of Commerce in Belgium. Speakers included representatives of Vitrociset Spa, DataSat, Intelsat, New Skies Satellites, and the European Space Agency. An entire ground system was erected within half an hour, demonstratng speed of deployment.